The Stabijhoun is an active dog that likes to have something to do. That can be agility, field work or just a nice long walk with its owner and a tennis ball.
This is a soft breed that responds well to positive reinforcement such as clicker training and shaping exercises, but that crumbles under pressure and force. Never force your new Dutch companion to do anything he doesn’t want to do. The Stabijhoun needs to figure things out in their own pace – letting their own natural curiosity get the better of them. “These dogs can read you like a book and, once they understand what you want them to do, there is no stopping them.” 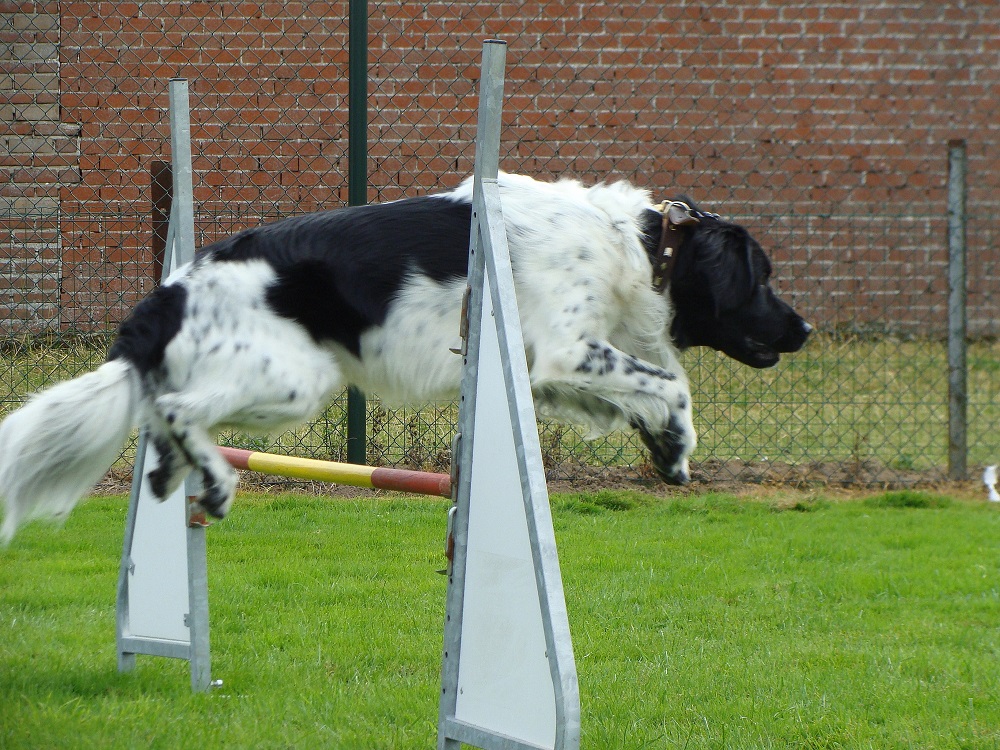 Agility
The Stabijhoun is easy to train and looks forward to a good workout. They like to have a task. Because of their great intelligence , speed, flexibility and eagerness to please, they are well suited as agility dogs; one owner prefers her Stabyhoun over her Champion Agility Sheltie! They do flyball, they love to retrieve tennis balls, and they show off at obedience class.
That said, the Stabijhoun would not become the likely champion for agility that you may expect. Speak to anyone who has trained their Stabijhoun for agility and they will tell you that these dogs are reliable and very accurate – hardly ever putting a foot wrong. Wonderful, you might think? They then tell you to allocate at least twice as long time to training one compared with other breeds, and to come armed with buckets of patience.
A breed which constantly looks to you for guidance and keeps a strong focus on its handler is not a bad thing at all in a sport which has a strong partnership at its heart. In fact, these dogs won’t let you out of their sight.
If something doesn’t quite go according to plan, take a step back and take your time to build their confidence before moving on. Like an elephant that doesn’t forget, a bad experience can easily leave a lasting impression so find a trainer who understands how to work with more sensitive and pensive breeds.
Although you need to spend longer on getting the basics right, the Stabijhoun is known for requiring less ‘maintenance’ training than other breeds. And the calm, patient demeanour which stems from its mole-catching heritage means your training can focus on what you want him to do without having to try and ‘manage’ unwanted behaviours.
If, by now, we have managed to put off the hard-core agility fans out there then that’s ok. The Stabijhoun might not quite measure up to the Collie, Aussie or Sheltie and should never be purchased with the sole aim of becoming a top agility dog. For someone seeking a reliable yet active family dog first, and potential agility partner second, this might be the just the dog. 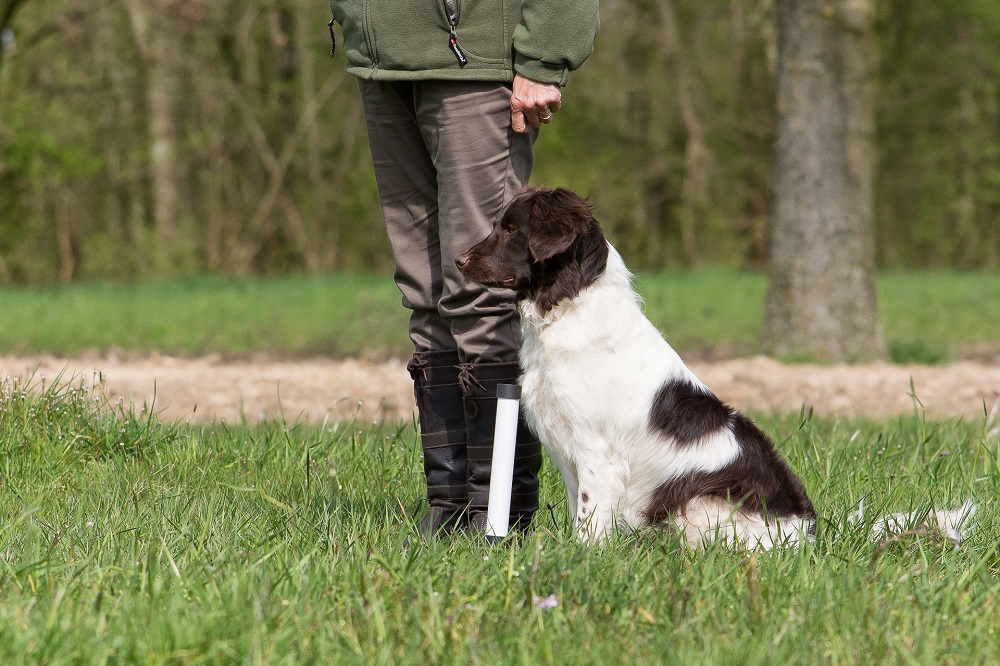 Field work
In Europe and Scandinavia, a number of people use the Stabijhoun as a gun dog. They are happy to spend hours in the field and will wait patiently and calmly for the shot. Historically used as both a pointer and soft-mouthed retriever for hunting ducks and rabbits, the Staby also has an impressive nose and has become a successful at blood tracking.
The breed requires a lot of patient and consistent training, early exposure to game and the sound of the gun. It is a dog that needs ‘building up’ rather than ‘controlling’ at a young age. Do not begin with steadiness training or you could all too quickly find his enthusiasm gone for good.
Below are the words of Klaas Zonnebeld, one of the premier field and hunt trainers in the Netherlands. He specializes in training Stabij's and his own Baike has set a high bar for others to follow.
"If you are not used to Stabij's you have to understand that they can be very stubborn and soft at the same time. That combination is not easy but makes it extra fun when you get results even when it sometimes is in very small steps. To train a Stabij is NOT to train them in the first year but just have fun with them. So the trick is to train them without them knowing that you are training. Usually after one year you can start to become serious about training and sometimes show the Stabij that I am more stubborn then he or she.
We, as breeders, start training our dogs very soon -- I think from day 2 or 3. I usually start with putting birds into the litter when the eyes and ears are closed. A pup only lives by instinct and smell at that point. So two times a day we put the warm lamp a little higher so the pups are a bit colder and crawl together. Than we take the mother out for walking and instead of mom, we put in birds rabbits etc. The pups crawl together around the bird and the smell will be in the heads forever. We do this until week 6 -- it depend a little on how rough the pups are -- the rougher they are, the sooner we stop. We do not want them to bite or play with the animals. 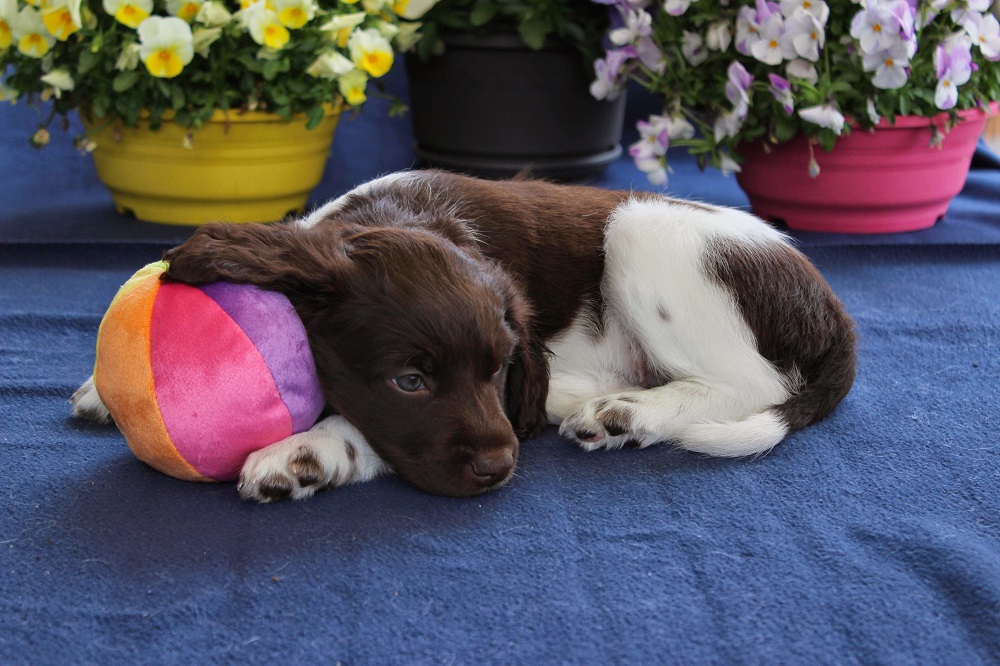 Around week 7 we start doing blinds with the pups, not real blinds because they do not know how. We train them so that it is all about fun and play. We put a plastic plate with some (just a little) food on it, we lay it down and show the pup. Then we walk away for three meter and send the dog to the plate. Success is guaranteed; we do this around three times and the next day we make the distance a little longer say five meters. Each day a little longer until ten meter and than we do double blinds. One on the normal ten meter distance, and then one with an angle of around 90 degrees at three meters away. The next day we again make the distance of the second blind longer until we have both plates at 10 meters. We can go on and on with this play. But to do it with all the pups will take time and before we know it they are at their new owners."