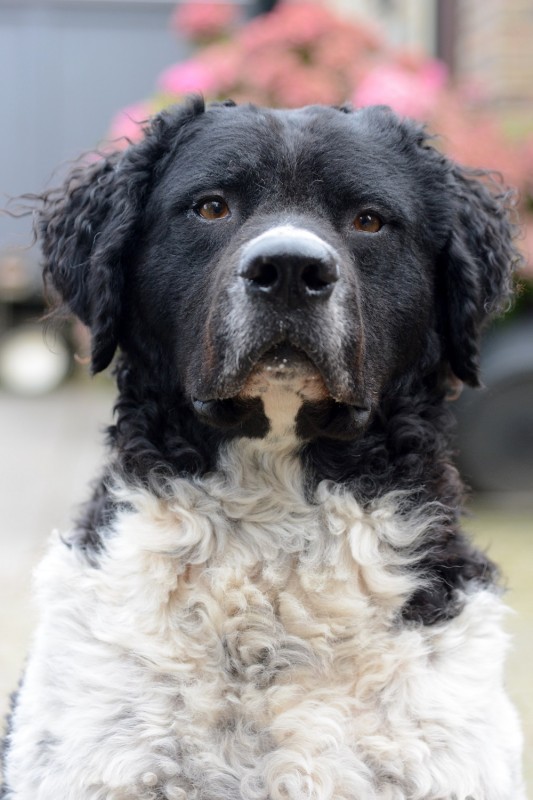 A wetterhoun is in temperament as it is in looks: large, uncouth, full of love and tolerance, yet very persevering in what it sees as its duties. A dog that is gentle and devoted, full of humour and happy to obey, although not always at the moment the owner sees fit. Once fallen for this breed you are lost forever.

Wetterhouns are said to be stubborn. Are they really? Yes, in a way they are, but in a specific way. A wetterhoun always finishes the job, at its own speed. They don’t see any harm in that, it is what they do. This is a pretty specific characteristic of the breed one has to learn to deal with. It is almost impossible to lose it by training and one should not aim for it really. Simply because this is one of the things very typical for this breed.

What is it these dogs finish, one might ask. Well, actually, just everything. When something needs to be fetched it will happily search for an hour if necessary. When a child plays with them, the dog is never the first one to quit. If the need is there to move a dozen toys, it will happily walk up and down a dozen times. And in case of an interesting smell it will sniff as long as it takes to figure out whatever is needed to know, even when the boss if calling, and after that it will return straight away. A wetterhoun doesn’t see any harm in that because it was just doing its thing and jobs simply need to be finished. That is what these dogs are like.

So are they stubborn dogs? Yes, they are, but not in a negative way. Persevering is a much better word. Once you know how to handle this, there is really no problem. After a while one gets to appreciate the sangfroid. Because they really are unruffled dogs which is a pleasant thing. It makes the average wetterhoun a stable dog. 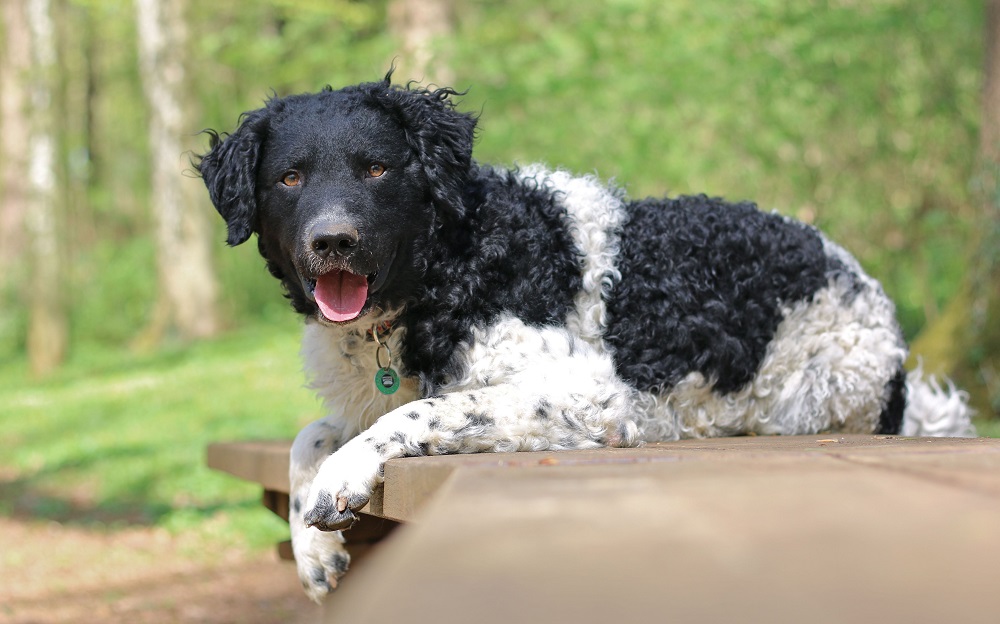 A wetterhoun is a good student, yet an independent dog at the same time. To train these dogs well the owner has to step in laconically himself. The dogs are intelligent and have a great sense of humour. They memorize faultlessly whatever made the owner laugh and are happy to make a party any time. But as soon as the owner makes it clear things are serious now, the dog will obey. Because above all this breed has a sensitive nature and it tends to get very attached to its owner. The most important thing to these dogs is a happy owner. An angry owner is a very unhappy dog. So do not be too hard on them, not even in a loud voice. A wetterhoun will always try to please its owner and will not deliberately be unwilling. The owner that is willing to put some time and effort in bonding with his dog will have a loyal friend that will do just about everything for him. 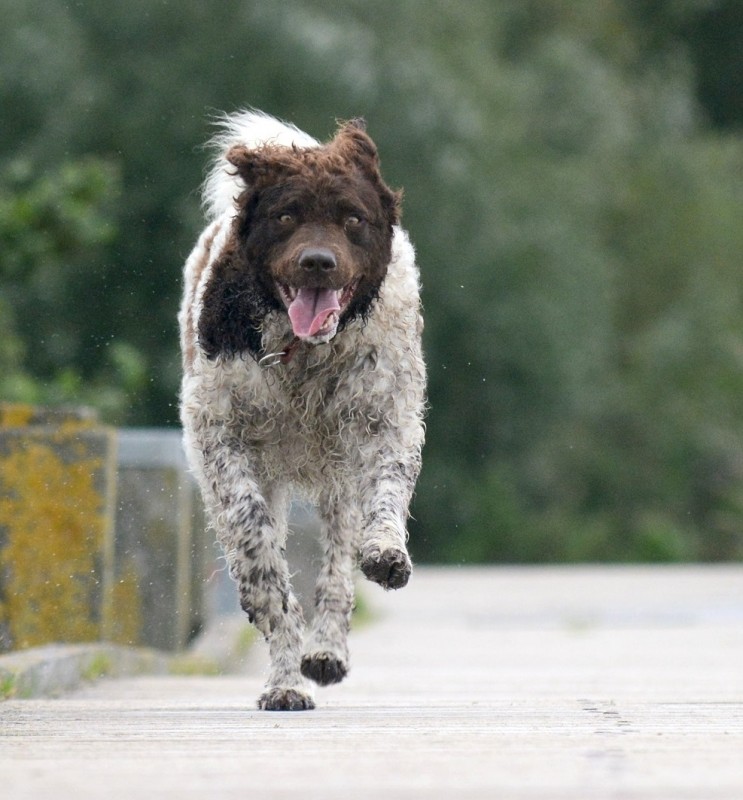 Wetterhouns are watchful but definitely not terrible barkers. When they bark something is going on. But usually in case of peril they are motionless being impressive. These dogs are protectors by nature and faultlessly sense any kind of trouble. With a colossus in front of you, the other one has to go through it to get to you. And in case of bad intentions, that will not be easy for the other party. Because a wetterhoun looks after its owners. Always. Being a burglar, a wetterhoun is a serious obstacle to run in to.
A wetterhoun rarely confronts the other party, either dog of man, but whoever provokes them will find they are very capable of defending themselves. Since a wetterhoun is very tough on itself, that confrontation could end unpleasantly for the other party.

The origin of the breed is guarding the grounds and indeed, these dogs love being outdoors. But just being there will not do; as any dog this breed needs exercise as well. Since the dogs tend to get very attached to their owners they hardly ever are out of sight. It makes it easier to let them run free because the dogs always keep an eye on their owners, even when checking out the environment. A wetterhoun definitely needs free walks on a daily basis; an hour a day is a good start. 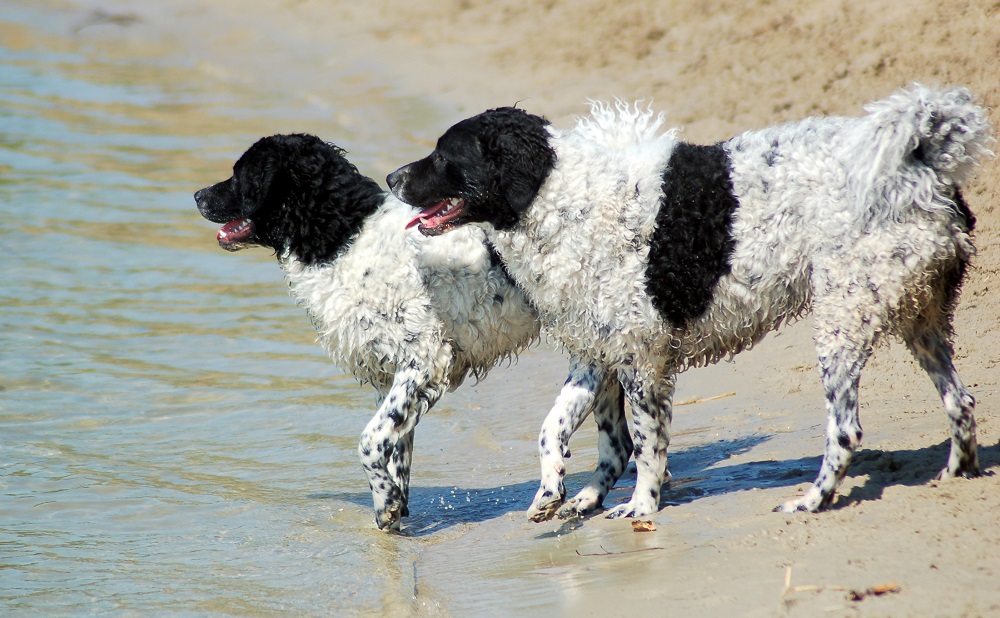 Although a wetterhoun has an excellent nose, in general it is not inclined to go and hunt on its own. Since the breed is so attached to its owner, the dogs usually prefer to do things together. So even though they may set in for a sprint, it hardly takes more than fifty meters before they stop. Because without the boss it is no fun anyway. Actually these dogs pay a lot more attention to the owners than vice versa: a wetterhoun is pretty hard to lose.

A wetterhoun was used to guard the premises and that is why many people say these dogs need a large garden. And it is true, wetterhouns do like to be outside. But the dogs also tend to get very attached to the owners and therefore they do not like to be shut away from their family. They feel the need to be around when things are happening. In the old days the dogs were outside all the time, but in those times there were always people around outside the house. These days grounds are often completely desolated. And although wetterhouns love to be outside they have the strong need to keep in touch with whatever is happening inside and outside the house. To keep him away from that will result in a very unhappy dog. 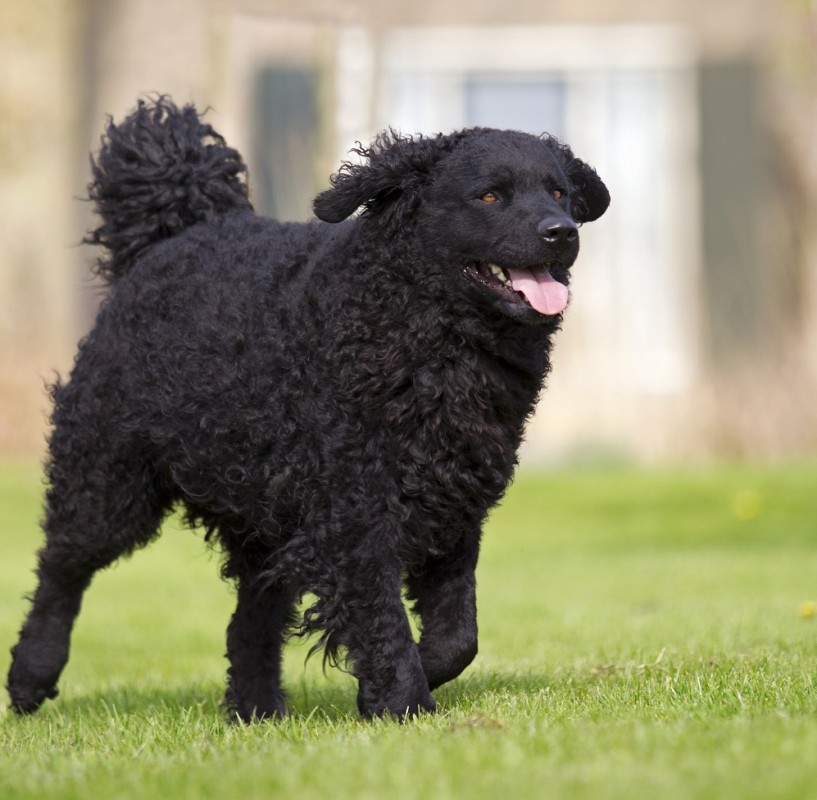 Wetterhouns are very capable of entertaining themselves. A leaf, a bird, any small thing can keep their minds occupied for hours. The breed hardly tends to run off and it is fairly easy to train them to stay on the premises. Still, fences are strongly recommended because they will not step aside for cars and other traffic: they do not recognize the danger in that.

Wetterhouns are very tolerant and accept almost everything where small children are involved. So the dog rather needs protecting from the children than the other way around. Make sure there is enough room so the dog can withdraw as soon as it wants to. Enable it to leave of its free choice the moment things get to him too much. Of course a wetterhoun should never be left alone with a child, it will always be a dog.
There is another thing that needs paying attention to: wetterhouns are known to be uncouth. That means the owner has to pay attention here, because the last one to fall over because of the bull-headed behavior of a wetterhoun isn’t born yet. They just don’t understand their own size and weight. Small children and young animals usually are handled with a lot more cautiousness.